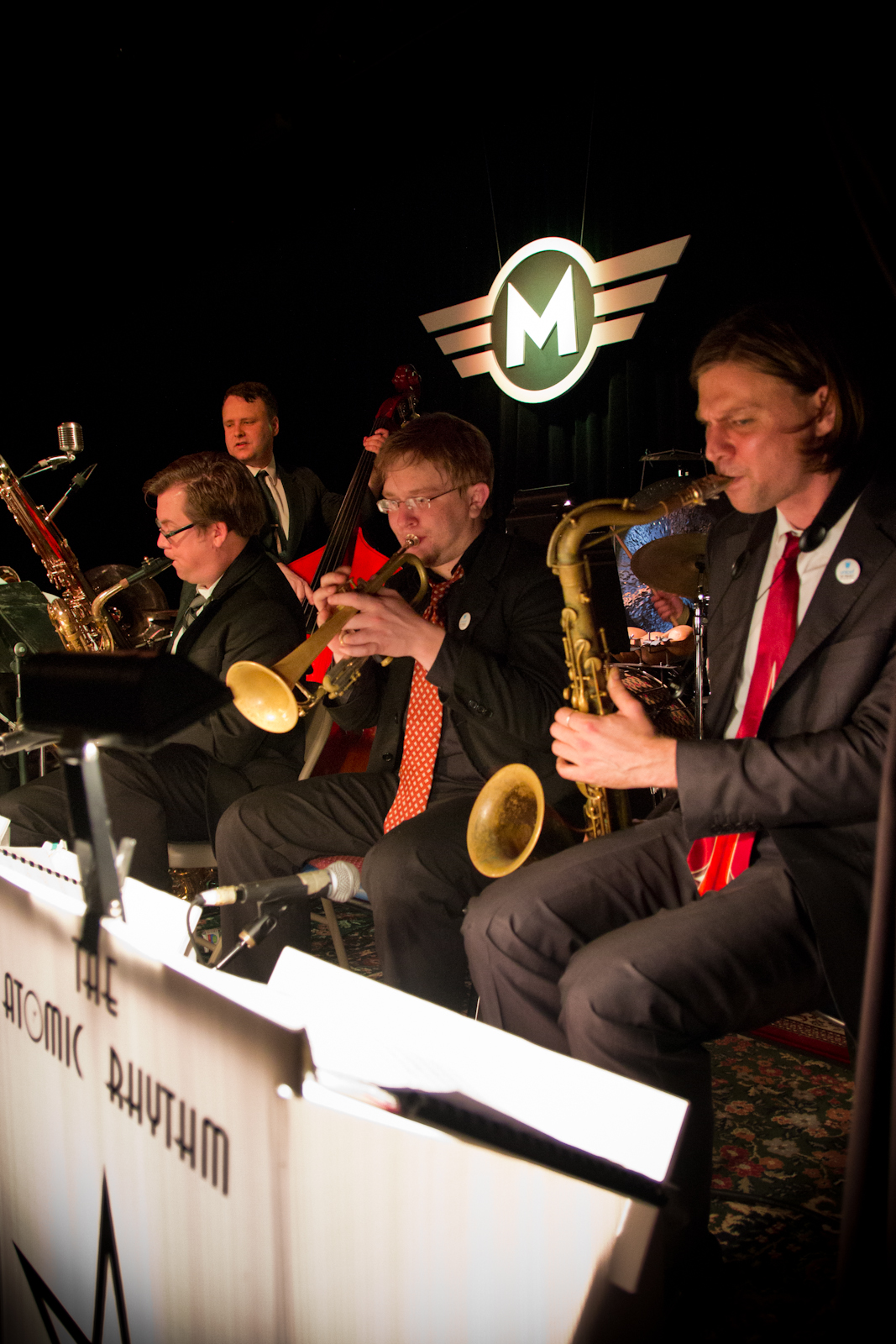 Posted at 02:21h in Jazz Show Saturday by Alix

This Saturday, the Atomic Rhythm All-Stars are performing at Irregardless and I spoke to George Knott, founder of the band shortly about the band. It was honest and tactless, to say the least, but he’s mostly honest with himself and how he works. As he says, “If Art Deco had a soundtrack, the Atomic Rhythm All-Stars would be it. If you don’t believe me, check them out for yourself this Saturday.

Who are the other members?

So basically it’s me with it’s six books of music and it’s whoever I hire. I usually hire a group of guys that I called “first”, but to say that their members is kind of disingenuous. We’re not a band in a traditional sense. We’re more like a business and whoever I hire for the gig would be playing under that name for the gig.

How did you get started?

Okay, my band plays primarily 1920s music and I’ve always been a fan of 1920’s and 1930’s American music. When I was in middle school, I started putting bands together. Basically ever since I have been playing music, I’ve been playing this kind of music. For the Atomic Rhythm All-Stars, we played our first gig in 2001, and it’s been about 17 years. I’ve been leading bands like this since 1990 – 1992 though, and it is just something I’ve always done and I’ve always approached it not as an art form, but more of a recreation. My goal is not to have music as a form of self-expression, but rather as sort of a portal to the past and trying, in any way, to get an authentic and historically correct representation of what the music was when it was current.

Why did you choose that name in particular?

There was no reason not to. I sat down in 2001 and I filled out a legal pad full of names that I thought were decent and I had about 35 names, scratching them out one at a time until I just had one left. And you know honestly, I think I just like the way the syllables roll off the tongue. It has nice typography; it’s got peaks and valleys; it’s interesting. It’s delightful to say and quirky to hear.

You say that jazz fills a void much neglected in the world. What void do you mean?

I think there is an enormous misnomer that music is about self-expression and music is an art and I don’t believe that. I think music is a product; like before you can be an artist, first you have to be a craftsman and people completely neglect that. They get up there with a saxophone and they try to be the next John Coltrane or Charlie Parker. Nobody cares about that, they just want music for dining and dancing. They don’t want to think about it. I mean, I think music is perfectly functional and I think not enough people work to fulfill that role as a functional… I mean, I think music can be art, but I think so much of music can’t be. I think often, if some art doesn’t make sense, it can be seen as garbage. And I’m not claiming to be an artist; I just want to play old 1920’s music.

How often do you perform?

Not often. We’re kind of expensive, if all seven of us play. We have probably played for the Irregardless four times a year and aside from that, we don’t often play. We’ve got a residency at Neptune’s and play there like a month of Monday’s and we’ll do that six times a year, but that’s basically like an open rehearsal to the public. One of the dichotomies about the irony of my philosophical outlook on music as a product, is that there’s zero demand for it.

*I’m pretty sure he means jazz music though.

Who are your musical influences?

To play 1920’s music, you got to listen to what came before the 1920’s. A lot of what we write is functional European harmony so you got to listen to Bach and Bach is amazing. One of the things that popped up in 1920’s jazz is this guy named Bix Beiderbecke, who was a horn player and he played a lot of impressionist stuff. He was inspired by Claude Debussy and Frederic Chopin, so I like a bunch of that stuff, you know. And of course, I also listen to 1920s music, but it’s Bix Beiderbecke, Duke Ellington, the California Ramblers, Don Redman. There are all these bands around the 1920’s that I have an appreciation for. But I would say listening to the guys who were their influences are who I listen to.

What’s a challenge for you and your music?

Aside from my honest bluntness and attitude sometimes, I don’t really have challenges. My band is great; there’s not a lot of work for us, but I would put my band against any band in the Southeast. For what we do, we’re pretty​ phenomenal. That may sound braggy-docious but I’m good at what I do and I hire the best guys that I can. We’re playing music that’s 100 years old and nobody’s alive who remembers it and not many people care all that much about it. Sometimes, I feel like Brian Wilson from the Beach Boys like whatever drives you, you got to remember that it drives you and not everybody else. Just because you’re passionate about something doesn’t mean anybody else in the world might be.