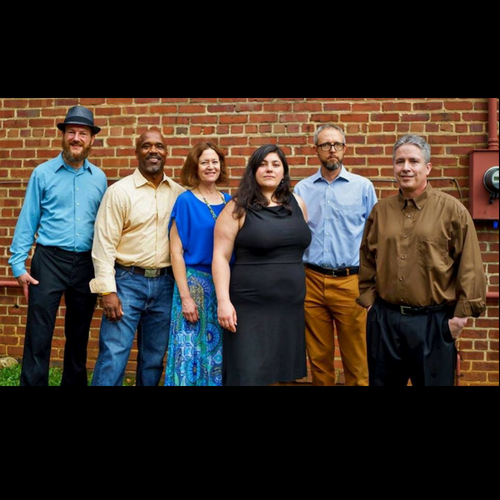 25 Jun Half Past Six

Posted at 19:54h in Jazz Show Saturday by Alix

Half Past Six, not just a time, but the name of the jazz band set to perform this Saturday at Irregardless. The members consist of Tara Nixon as the vocalist, Cara Albora Shaw on piano, Ken Bowers on jazz guitar, Scott Griffin as drummer, Doug Mayes on saxophone, and Chris Mervin on bass.

I chatted briefly with Scott Griffin about the band and their take on the jazz scene in Raleigh.

When did you all form?

Since about five years ago.

Why did you form as a band?

The bass player, Chris Mervin and I were in a big band and we were wanting to form a smaller group with the same standard, a quintet, and so we started adding numbers to get to where we could play music like a quartet or a quintet would play.

Do you have a special reason why you choose the band’s group name, other than there are six members?

It’s funny. We had some friends who suggested names and we put it for a vote and that’s the one that won. It did reflect that there are six members in the group, that’s part of it. One of the venues we used to play, we always met there around 6:30 and that’s kind of where it came from, anyway.

It’s funny how it worked out that way. What kind of jazz music would you say you play?

We focus on jazz standards, including latin. Jazz mostly from the 40s, 50s, and 60s; most of the songs are from that era.

How often do you perform?

We perform about, depending on the month, four times a month on average. Sometimes more, sometimes less.

How often do you all practice?

Does that mean that four times a month, you also perform every week too?

Right. That’s in addition to performing.

How do you compare the jazz scene in Raleigh and Durham to say, NYC or Boston?

I haven’t been to New York or Chicago or anywhere like that in a while, but I think that to me, anyway, it seems like the local jazz scene is growing in Raleigh. I’ve met several different other people and lots of several other bands and the quality of music has gotten better while the quantity has gotten to be a richer as far as areas in the state. I think the Triangle is a rich area for jazz.

Do you think because it’s gotten, because there are more groups, more competitive?

What is one fond memory you have? Performing in a certain place or certain time?

Does it need to be a performance?

Well, one thing I can tell you that comes to mind. We were having auditions for our singer. We had auditioned through the people and Tara came through. We all just looked at each other and smiled and just knew she was the one. That was a fond memory of mine and she’s been such a great fit. I spoke with Chris and his fond memory is similar to mine. He said one of his fondest memories was when we auditioned Doug, the sax player and that we all knew he was a perfect fit as soon as we played the first song.