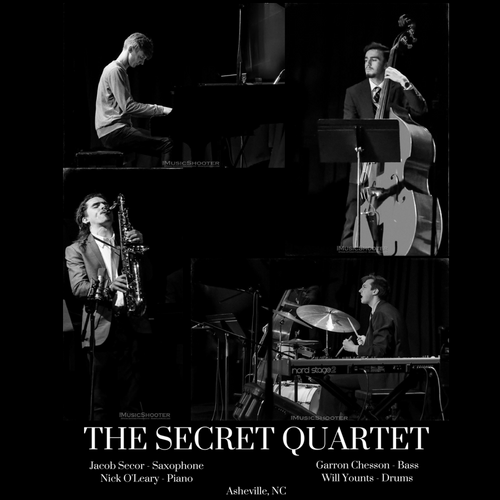 Posted at 02:51h in Jazz Show Saturday by Alix

The Secret Quartet is a four member group made of students from UNC Asheville. The members include Jacob Secor on Saxophone, Nick O’Leary on Piano, Garron Chesson on Bass, and Will Younts on Drums. I spoke to Jacob Secor briefly about their Saturday show at Irregardless.

How did you all get started?

We are all students at UNC Asheville at the Jazz program there and we all wanted to create – I guess I wanted to create – an ensemble that was focused on interactive playing. The idea was to have a class that we could basically put a band together and really focus on – not necessarily the fundamentals of playing – but really focusing on composition and what it means to listen to each other and play with each other, rather than at one another, if that makes any sense. And so I took that to the Dean of the Department – er sorry, the Chair of the Department and basically wrote the curriculum and made it a class. We got the four guys together with our teacher Jacob Rodriguez and somehow got to make a class and then for a whole semester, we wrote music together and focused on playing together and by the end of that, we had played together for so much that we were like, “man, we need to actually do something with this.” So we started gigging regularly in Asheville and out of town and now here we are.

So are you all still students?

No, Nick, the piano player and I just graduated. Will and Garron, the drummer and the bass player, are in their final senior year.

Wow, that’s crazy. You guys are young. So you have your own compositions. Do you play them during your gigs?

It’s all original music or sometimes we do our own arrangements of old standards, but most of what we’re playing is completely original music.

Cool. How did you choose your band name Secret Quartet?

That came from what people called us at the school. We have normal ensembles at the school that you have to audition for and this is an ensemble that had no audition for it because we had already picked all the members and it wasn’t listed on the ensemble audition list, so people didn’t really know about it. As people started figuring out about it throughout the semester, they were just calling us the Secret Ensemble. We came to our first gig and we knew we needed to have a name and we couldn’t really think of one so it’s that and it kind of stuck and now it’s our name.

Would you consider changing in the future if you don’t want it?

Probably not. I mean it’s just stuck with us and we use it so much now that I don’t see a reason to change it, other than it’s bad, I guess.

And do you all mostly play in Asheville?

Yeah, yeah. We’re all based out of Asheville and most of the gigs that we’ve done have been in Asheville. We’ve done a little bit of out of town playing and now we’re actually on a three week tour that brought us here.

What kind of tour?

It’s kind of just a self-made tour. We played in C-Grace last week and Charleston this past weekend. This week, we’ve split up and have done our own thing and we’re meeting up at Irregardless on Saturday and then we’re headed out to the coast to play in Wilmington next week.

I also read you guys played international in your bio.

That’s Nick. The bio was referring to all the different things that we’ve done individually. Nick, who has a classical background, is a phenomenal classical pianist and went to UNC School of the Arts and after he graduated from there or maybe his senior year of high school, he was asked to go out to Germany and conduct this symphony in Germany and that was crazy. While he was there, he met someone else who asked him to come back and do the Bilbao symphony. Those are two very, very accomplished and distinguished symphony that Nick both played piano with and conducted.

Of all the establishments that you played, which do you like playing the best? Or is there a preference in venue or city?

Well, I guess as part of this group, most of our playing has been in Asheville and I think any band will say that hometown shows are the best thing, just ’cause all your friends are there. For me, Raleigh was where I went to high school. We had a lot of fun playing in Raleigh this week; I expect this week to be really, really fun as well because it’s going to be a bunch of old friends and people I haven’t seen in a long time who’s only seen me play when I was a youngster. I look forward to it.

What can be some challenges you face as a group?

I guess it would be getting everyone together. We’re all kind of doing our own stuff. I play with lots of different groups and play maybe four, five nights a week sometimes in Asheville and it could be pretty hard to get everyone in the same room to make a decision about songwriting, touring, what to do about our next album, whenever that may be.

So you have not released one yet, correct?

So when that happens, will all the stuff you’ve recorded be put into one or will it be split into different albums?

Not so sure. That remains to be determined.

Do you have any significant stories you have that you remember as a group?

I guess… wow. This is dangerous territory. The most – I think the one that I like the best is just watching each other grow. It’s not one-night stories, but when we all started playing together, we were still trying to figure out what we were doing. Definitely have watched each other and helped each other grow over the past two, three, four years enormously. I think any of the small stories like we all played at each other’s junior or senior recitals at school. A good one is, maybe, at the beginning when we all got together, Jacob Rodriguez, our teacher who is an extremely accomplished, international touring musician, sat us down and told us, “you guys are going to write a tune every week.” So we had four songs every week. In addition to that, at the beginning of every rehearsal with him, for the first ten minutes, we were going to play what he called “free”, which at the time we probably didn’t really know what that meant. It just meant that there’s no song to determine what we’re playing. It is total free, improvised composition – like in the moment. And that really shook us. None of us had done that before so at the beginning of every rehearsal, it was just ten minutes of just listening to each other and make music on the spot and see where it goes. That really brought all our personalities into the same room, all of our musical personalities and what our day had looked like. It really allowed us not just to know each other personally or musically, but also get to know what our compositions are going to look like and how they’re going to relate to one another; what’s going to grow over the semester of that class and what’s over the coming years we’ve been playing together​.

Have you ever used those for your music?

Absolutely. That kind of thing has definitely found its way into our music, whether it be writing the word “free” into the solo section of the chart or whether it be using literal motif that we found in that music or just ideas that “free” playing got us into that we later built on and things like that. So it was incredibly instrumental to our group.

Have you played “free” improvised in any of your performances?

Absolutely. It’s become a part of our playing and there are times where it’s like, “we’re going to play ‘free'” and that happens. And then there are times where it just happens and we haven’t necessarily talked about it. Like Nick’ll start playing and then it goes somewhere – we’re not reading out of a page, we’re not playing something we’ve never played before- like the intro to a song is being improvised spontaneously. It’ll all intuitively, hopefully come around at one point and it would all work out. But I think that’s the beauty of jazz music in general, especially when you think of free compositions, it opens up the borders of possibilities quite a bit.

And it just works out? You just play and it… Does it ever go wrong?

Yeah! Definitely. Hopefully that doesn’t happen on stage. We try to make sure we’ve built in ways for it not to happen if we were to do something like that on  stage. But definitely in the practice room where we’ve tried things and it didn’t work out before, things have definitely gone wrong. We’re not actually reading each other’s minds all the time so sometimes we communicate different things and it goes different places.