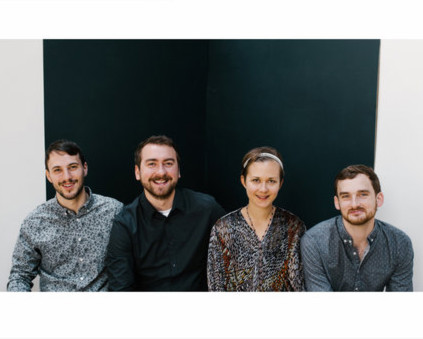 Posted at 21:47h in Jazz Show Saturday by Alix

The Zen Poets have been at Irregardless for years and the energy the audience feeds off of them is powerfully mellow and inviting. Consisting of members Annalise Stalls on saxophone, Aaron Gross on bass, Daniel Faust on drums, and Gabriel Dansereau on the jazz guitar.

Aaron Gross: We were all in school at UNC Greensboro and that’s how we met. Annalise started the group around 2013 and I’ve been with the group for four years. Annalise and I have been co-leading for the past couple years.

Why did you choose the name Zen Poets?

Annalise Stalls: I actually write zen poetry and at the time five years ago, I had to come up with a name for the band and I just had to come up with something really quick and I said, “Well, what have I been doing lately?” I had been absorbing a lot of poetry and the zen philosophy, so it just kind of came together like that.

AS: There’s nothing like a great performance and the way that energy is exchanged between various musicians that are performing together, the way that they exchange energy and how they exchange energy with the audience. When it goes really well, it fills you up and then there’s also the aspect of performing where one gets to express what’s inside of them. Creative experience is super empowering.

AG: Similarly, I think that seeing a performance is like a shared experience between you, the audience and the other band members. If we spent enough time practicing and know stuff enough, we can hopefully convey a message to people that we’re all enjoying the music. Hopefully, when we perform, it’ll convey that we are just instruments that are being used for something that’s bigger and more important than us as people and it’s like a shared experience between everybody. Nobody is more important than anyone else; the performer is not more important than the listener.

Where do you get the inspiration from the compositions you wrote?

AS: Not always, but sometimes the poetry is where I get inspiration for my song ideas. I have some songs that I’ve written for the band that do have poems that go with them, and some don’t. It is part of it for sure.

AG: For me, sometimes, the melody comes when it reminds me of something, but more often than not, I have a specific person or a specific place in mind. I get inspired by the people around me and also the places that I’ve gone like the mountains of North Carolina or heading out West and seeing the landscape out there.

What are some challenges you face with the band?

AS: Scheduling is hard sometimes because everyone is really busy. When important decisions have to be made, we work through it. It’s also hard to find venues for what we do and what we want to present, but we’re glad to have places like Irregardless and Sharp 9 Gallery.

Do you think it’s gotten easier, the types of things you learn as a musician and other added business work?

AG: Some things have gotten easier and some things have gotten harder. I think whenever the more I know, the less I actually know. Whenever something gets done, there’s another challenge that presents itself and that’s not just a terrible thing, it’s a wonderful thing as well. Practicing, like any other artist doing photography or writing, it’s always going to be better.

Tell me about the tour and the new songs.

AG: So when the group got started, Annalise wrote a lot of the music, but she and I are co-leading and the record is going to be half her songs and half my songs. We both gave each other input on our songs too, to help arrange them a little bit. The album we just recorded this part Spring, we did a Kickstarter and were fully funded in May. We are doing a little run-out tour playing in New York, Boston, and Washington D.C.