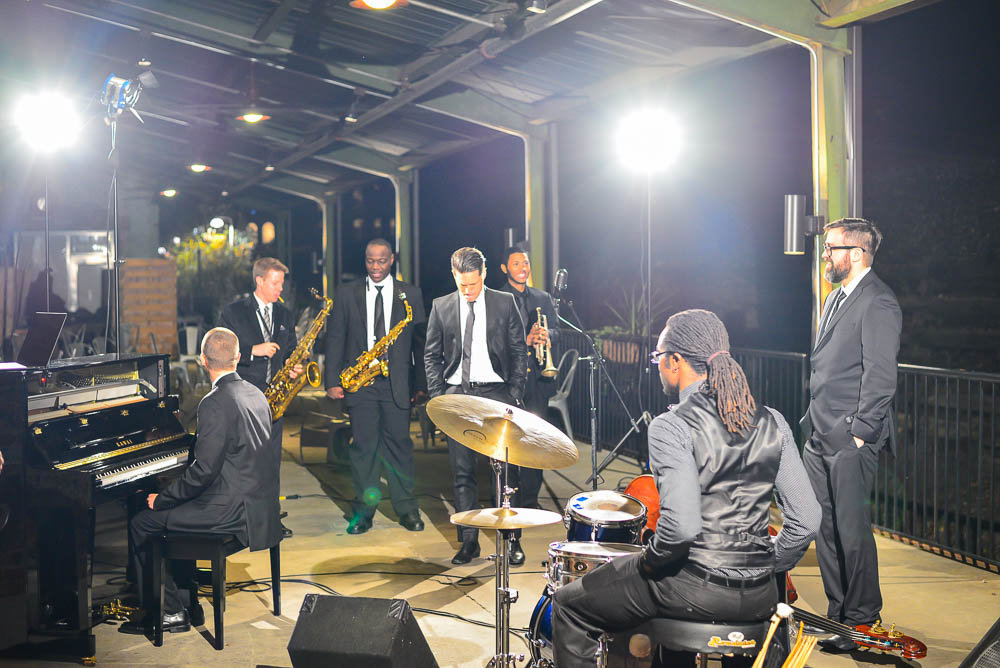 Posted at 19:16h in Jazz Show Saturday by Alix

Big bands and pop tunes collide when this band comes to Irregardless. Practically the only time they’ll play for the public, but otherwise, they play exclusively for private events. The Boulevard Ensemble is sure to dazzle when they come on the stage this Saturday.

The founding members are vocalist Geoffrey Register, Tom Rau on double bass, and Noah Sager on piano. And while he’s not a founding member, Theous Jones plays drums every gig. The founders had realized they were hearing the same tunes being played at weddings and other events, either with jazz, rock or pop and decided to change that by playing and arranging a mix of songs tailored to their clients and the venue they’re playing at.

“We wanted to provide a dance, wedding kind of corporate band that’s just a bit different than the regular ones, kind of in a big band style, but with pop tunes,” said Sager. “We all talked about that and decided to come up with some different tunes to range and just got started. We’ll play some old jazz standards as well as some newer pop tunes in that old style.”

Their repertoire prove their expanse of music knows no bounds, as this is only a small list of what they offer. From Frank Sinatra to Led Zeppelin, the Beatles to Britney Spears, their range travels beyond genres and the diversity in the music selection shows they have no limitation.

“We play different songs, depending on what the client wants,” said Sager. “We’ll switch up our songs each gig and if we do a lot of weddings, for instance, they’ll ask for specific songs for us to play.”

Even the additional players they have for each gig changes where they’ll have either one horn player or four horns for an eight-piece line-up. Some musicians who have played with them include Al Strong on trumpet, Lucian Cobb on trombone, or Kim Smith on saxophone.

The band can get pretty big if there’s eight people playing and Sager says it comes down to the music charts and as long as the charts are written well, sometimes, they may only need to practice one time. Maybe not even rehearse at all before a gig.

“I’m actually also the music arranger in the band,” said Sager. “As long as the chart is really good, we can actually make it work, but that relies on having the arrangements and charts really accurate and easy to read.”

And they make it work, but a gig isn’t without its faults and while nobody’s perfect, the band isn’t afraid to admit that they make mistakes.

“That stuff happens​ all the time,” said Sager. “You just go with the flow and do the best you can. We certainly don’t stop in the middle of a song with people there during a performance. I mean, if you end up playing a different note than what you mean to play, then you make that work as best you can.”