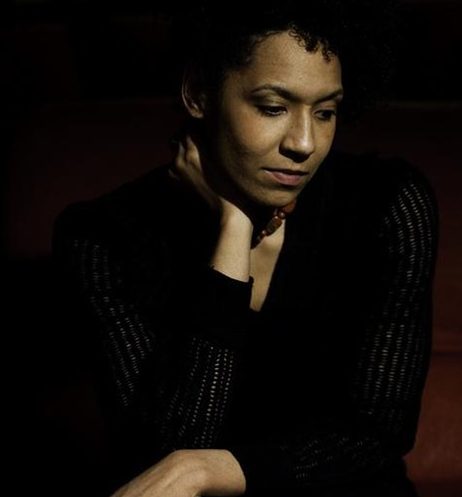 As a host and server at Irregardless Cafe, I can honestly say the job comes with many perks: friendly customers, helpful coworkers, a company philosophy of serving the community, and obviously amazing food anyone and everyone enjoys. One of my favorite parts of my job is enjoying the talented musicians who take the stage every night. With such a diverse and energetic lineup, Irregardless has become known as a destination for dinner and live music in Raleigh.

This Saturday, the Ti Harmon Group will be playing at the restaurant. I had the opportunity to chat with Ti and learn more about her background, performance style and inspirations. As an internationally acclaimed artist, Ti has produced multiple albums and won several awards. After graduating from NYU, Ti took her talents to Spain and France. We are now fortunate to have her in the Triangle, inspiring audiences with her fellow NC Central University Department of Music classmates.

Ti was born in Philadelphia, where she agrees there must be something in the water. Watching groups from her hometown such as The Roots, Patti LaBelle and Jill Scott succeed gave her hope to follow her dreams. As a child she would create melodies in her head, trying to find a way to record and communicate them, even before she knew how to write music. Her family introduced her to an eclectic range of artists, from Sara Vaughn and Billy Joel to Motown and Classical. She discovered Michael Jackson and was in love.

As she grew as an artist, Ti realized that music gave her a purpose. After performanc

es people approach her to tell her how horrible their day was, but that her music lifted their spirits. “That makes me feel great,” she said, “like I am actually contributing something. That inspires me. Reaching people through the music, connecting to some sort of emotion, allows them to feel more human and makes me feel better.”

For her performance next Saturday, Ti says to expect a lot of percussion and rhythm, as the band will feature both a drummer and a percussionist. She’s looking forward to experiencing a new expression that comes along with that. Ti enjoys playing at Irregardless. “I like the community between everyone. Last time I was there I could tell the servers were enjoying the music and the patrons were dancing. There is a sense of community and festiveness. It’s not just a spectator performance.”

I speak for the entire staff when I say we’re looking forward to it too! Join us for dancing and a electrifying performance by the Ti Harmon Group, this Saturday at 9pm. 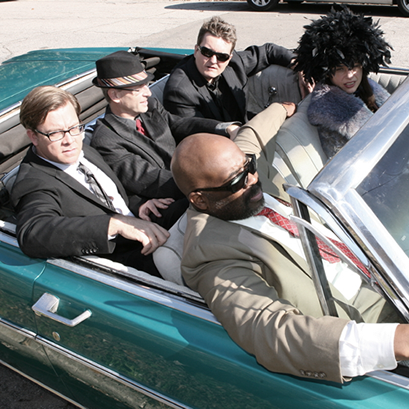 Anyone who’s heard of Sidecar Social Club knows of the Ford Galaxy they’ve posed in, courtesy of F.O Finch or by Lisa Wood’s indistinguishable feather hat worn at every performance. Fun fact, Lisa’s been documenting all the photos she’s taken with the hat on twitter with the #girlwiththehat. They’ll be heading towards Irregardless this Saturday for a night of fun, dance-worthy music. The members of the Sidecar Social Club consists of Jim Crew, Aaron Bittikofer, Edward Butler, F.O Finch, and Lisa Wood.

In 2011, Lisa Wood contacted Jim Crew to start a group. Nothing was definite and none of the members had actually known each other, but they’ve revolved around the same venues and had similar musical interests. When they all got together for a session, sparks flew and they’ve been together ever since.

Next came the name. Lisa, who used to be a bartender, came up with it. She has knowledge of vintage drinks such as a sidecar which is traditionally made of cognac, orange liqueur and lemon juice. “New Orleans has such-and-such Social Club, whatever that first name may be, and we all liked the band Buena Vista Social Club,” said Bittikofer. “We were toying around with such-and-such Social Club and Jim mentioned Sidecar, so we just stuck those three words together and said yep, that’s the band name.”

Their music, they describe, would be considered danceable, New Orleans jazz music. ‘You have a good time when you hear us play,” said Bittikofer. Jim Crew follows suit and said, “We all have that deep appreciation for American music, beginning with music in the 20s and 30s. Just the atmosphere and the spirit in which the music was performed in that era and that’s what we’re trying to maintain in the present day. Even though we may be playing modern music or music we’ve written ourselves, it’s still played in the style of that early music.”

Like most performers, playing live is a thrilling experience and perhaps almost drug worthy enough that most don’t stop performing. “There’s an energy there that’s coming from the band that is sometimes reflected from the crowd and it’s undeniable,” said Bittikofer. Crew echoed, “[With playing live], you only get one chance to do it. You need to be completely in the moment. The challenge is a privilege to share that with the audience that enjoys what you’re doing and I get a lot back from that that I don’t get anywhere else.”

One of the biggest challenges that artists face is the promotion of their music, which the band is no stranger to. It’s one thing to play among your friends and family, but it’s another to reach many strangers, especially against other artists competing for the same audience. “There’s so much chatter out there with the incredible amount of music that’s released daily,” said Crew. “Trying to keep your audience’s focus is an ongoing challenge to stay on top of.”

For those who are wondering whether Sidecar Social Club is coming out with new music needn’t worry. Almost four years from their last album SSC Live released in 2014, they’re in the studio working on a new album called “Mystery Island” with 11 original songs, set to be released this summer. Crew said, “Mystery Island is a song I wrote a couple years ago. Aaron came up with the title and Lisa wrote lyrics to what was an instrumental piece that I’d written. She wrote the lyrics in French and they describe a rendezvous on an island and it’s more about a feeling and has a bit of a story.” Aaron mentions they’re excited for the release and either can we. 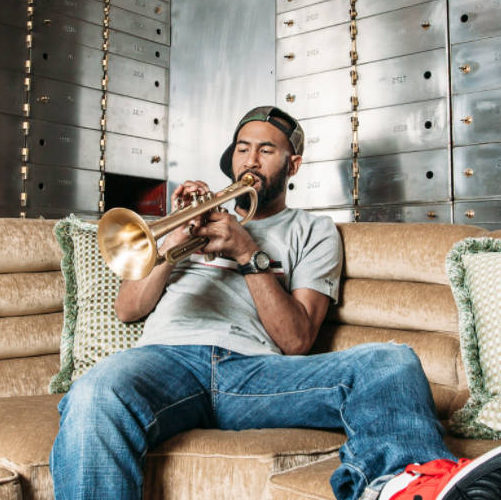 Carrying his instrument of choice, the trumpet, Al Strong will make his way across the Irregardless stage, come Saturday night. Jazz trumpeter, composer, educator, and curator, Strong is a jack of all trades when it comes to anything jazz. He’s played and recorded for artists such as Aretha Franklin, Clay Aiken, Big Daddy Kane, and Phonte Coleman, to name a few.

Having grown up in a heavily music-appreciated environment, with his grandmother playing gospel hymns on the organ during her weekly in-home church services, and his grandfather introducing him to Ray Charles, Jimmy Smith and Donald Byrd, Strong gained an interest in the production of music and the sounds instruments make.

Throughout his youth, he’s experimented with several instruments, some among them were the organ, drums, and violin, before settling with the trumpet. When asked if he thought the trumpet an instrument that he chose or that chose him, he answered that he chose the trumpet. “I guess partly because my last name is Strong, and I remember hearing louis armstrong’s music. Some of that as a child and then I more or less gravitated towards the trumpet.”

Strong attended Duke Ellington School for the Performing Arts where he was able to performing with his school’s jazz band overseas. From there, he received a full-tuition scholarship to North Carolina Central University (NCCU) to study jazz and then earned a masters in Jazz Performance/Pedagogy at Northern Illinois University. Now, he is an adjunct trumpet professor at NCCU as well as co-founded the Art of Cool Project, with Cicely Mitchell.

“I like that [Art of Cool] fills a void in our music scene that before, didn’t cater to certain audiences, [such as] young working professionals. I would say primarily African Americans, but really diverse audiences,” Strong said. “Providing music and entertainment options that reach diverse audiences; that’s probably what I enjoy the most. A lot of the courses I’m making has been feedback from the concerts so it illustrates the point of the fulfillment of the void in the cultural scene.”

In 2016, AL Strong released his debut album, LoveStrong Vol. 1, which demonstrates the style he’s come into throughout the years. Perhaps over ten years in the making, as some of the tracks can be tracked to the beginning of his NCCU career.

I asked him if he thought his style has changed over the years or has it weaved itself to what it is now and he answered quite knowingly. “I would say that personal style is just that. It’s an individual thing and I think that what we strive for, as artists and performers, is that over time we work hard to refine that style and add to it. I think it’s more of a point of clarity; to be able to communicate your vision for the music in a more clear fashion to your audience. That’s probably the main goal for most artists who are also composers, also presenting original material or ideas.”

Having been boths sides of performing and composing, Strong finds himself comfortable with both and that both go hand in hand. “There are quite a few opportunities to perform and that opens opportunities to compose some things for those situations. It’s just that, in a sense, composing can be a little more of a challenge because most of the time, the only feedback you get is from yourself until it’s actually presented for people and you’re getting that feedback almost immediately. The composition angle of it is that the rewards come a little later than you find in a performing situation.”

The hardest question an artist or composer is often asked is: which is your favorite piece. The answer is never simple and it’s not often one single piece, because each piece of music, of art, of composition, is a part of the artist. Al Strong had hesitations answering this, but still, he gave an answer.

“I wouldn’t say I have a favorite piece; I have several that I have more a connection with for various reasons,” he mused. “I would consider myself more of a ballad player; I’ve always loved ballads, slow songs. The slower songs that you hear on the album, I feel like I have more of a connection with. If I think back to the recording studio, I just felt, because they were slower songs, there’s more time to create over them and improvise and really get to a point of expression so that’s why I’d say they’re my favorites.”