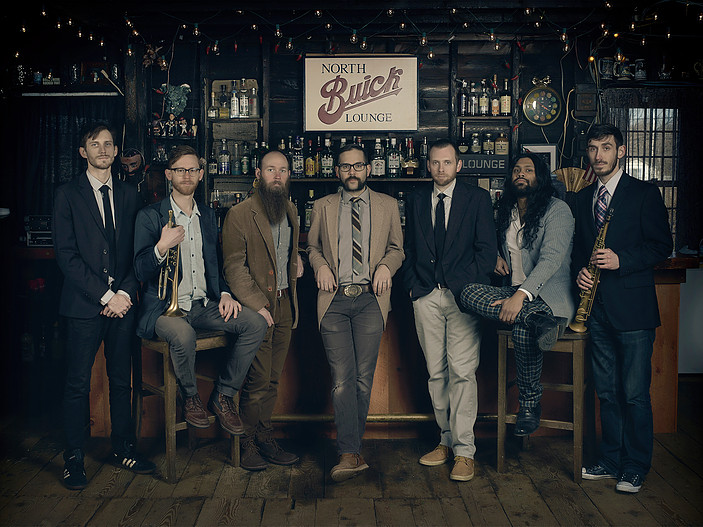 Posted at 02:18h in Jazz Show Saturday by Alix

Despite whatever weather we’re having in Raleigh, rain or shine, Soggy Po’ Boys are sure to hit it off at Irregardless this Saturday. On tour promoting their ‘Smoke’ album, which is the first full-length recording as a septet and the tracks, they claim, are as punny as their album name. The members are Eric Klaxton on Soprano Saxophone and Clarinet, Zach Lange on Trumpet, Nick Mainella on Tenor Saxophone, Mike Effenberger on Piano, Stu Dias on Guitar and Vocals, Brett Gallo on Drums, and Nick Phaneuf on Bass.

The seven member band started in 2012 in the town of Dover, New Hampshire. At the time they formed, another group just had a gig at the Barley Pub and at the end of the night, the members who would eventually be the Soggy Po’ Boys played around by the piano and decided they should play together continuously.

Their music is an edgy take of the New Orleans style jazz and their songs mirrors that fact. For those who may not have heard them perform frequently in their familiar haunt of Sonny’s Tavern in Dover, this performance is sure to replicate the atmosphere and also make audiences feel as if they’ve been transported to New Orleans themselves.

Playing music that inspire others is a delight and the Soggy Po’ Boys enjoy revving up the energy of the audience they play in, wherever they are.

“I think when we are playing music for an appreciative audience the energy on the bandstand comes up a notch,” Nick Mainella said. “We feed off of the audience and they feed off of us. When both are in sync it becomes an incredible experience for all involved.”

Because jazz is universal, no matter where the band goes, they’ll always find an audience. “Smoke” offers fast tracks such as So Simple or Birdseye that carry an upbeat feel while slower tunes like Meet me at the Funeral and I Hardly Knew Her carry a sweet slow-dance feel, and still hold the New Orleans vibe.

And as they’re on tour now, I asked Eric Klaxton some last minute questions about the band and their new album “Smoke”.

Have you all performed along the east coast before? How does it compare to performing in New Hampshire?

Yes, this will be our 5th east coast tour. When we leave New Hampshire, audiences seem to respond to the fact that we aren’t/won’t be in their area often. There’s a wonderful sense of excitement and appreciation at nearly every show.

What kind of themes represent the songs in “Smoke”?

Smoke explores a few themes: The passage of time, love, and loss, to name a few. There is a refreshing sense of humor that hopefully doesn’t get lost in the mix as well.

What track is your favorite?

A favorite?!? That’s hard… Without necessarily picking one tune, I would say that my favorite parts of the record are almost entirely the group improvisations. We were able to capture some really exciting moments in the studio. Group improvisation is an important part of this music and I’m very pleased with how we played together.

This is the fourth album you’ve all put out. How do you think you’ve progressed as a band in your music over the years?

Well, over the years, I think we’ve spent a lot more time digging into the vast catalogue of music that’s come from New Orleans. And we all individually make a real effort to visit the city often, which definitely informs our approach to the music.

Our life experiences are more vast and our perspective is broader each time around. We have also been able to better distill what we like and what we are good at. Smoke showcases that.

Do you all have the same buzz feeling from releasing a 4th album as you did when you released the 1st?

It’s always exciting releasing new music. I love to perform in a live setting but it’s a different kind of excitement to have made a performance permanent for everyone to hear over and over again. I will say I’m most proud of this most recent record.

What excites you about performing in different places? Are the atmospheres the same?

I love sharing this music with new people. It’s not a particularly common sound and it’s fun to watch people realize how much they like it. The more new audiences we can play for, the more exciting it gets.

I can believe that we have done something like that in the past, but it’s not a regular thing. Maybe it should be though!

Catch the Soggy Po’ Boys when they come to Irregardless this Saturday!