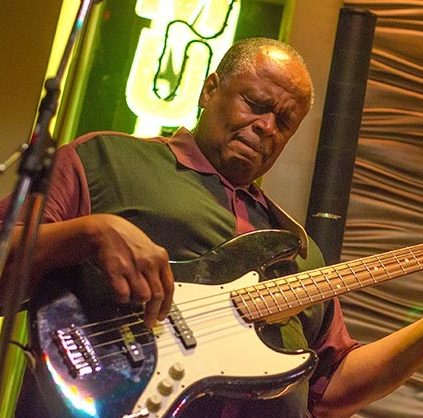 27 Mar Ed Moon and the Stars

Posted at 18:45h in Jazz Show Saturday by Alix

Ed Moon and the Stars orchestrating through the sky on a veil of smooth jazz and landing at Irregardless Cafe on Saturday. Either with groups or on his own, he has been playing jazz at Irregardless Cafe, as well as other venues, since the 90’s and has no intention of stopping anytime soon.

Hailing from Nashville, Tennessee, Moon grew up in a family of musicians and he feels that music comes almost naturally to him having been surrounded in an environment where music is constantly being played. From there, he moved to NC to 1979 to teach part time at North Carolina Central University in the music department. Nowadays, he is a retired music and string orchestra teacher from the Wake County Public School System.

Being quite musically inclined, he plays bass and sometimes guitar. When asked about his musical style, he said, “they all have an influence on you. To me, personally, you’re working towards what your special niche is, and try to explore that. And all those influences come in and you might add a little to it or learn from it, and you can come up with something unique.”

Jazz, as a genre has changed over time and has evolved with different elements being added as well as the styles from other genres as well. What can influence a person may be the different music they have been exposed to.

With Moon, having grown up in Nashville, he was exposed to country music as well as played in the Nashville Symphony. He recalled, “a lot of things have come up that are new now that weren’t there when I first started out. But I also learned and studied that everything is interconnected and influences each other. I played in some R&B clubs in the Nashville area, and then the jazz club in the Nashville area. I learned that wherever you are there will be people who know a bit about the background that you’re playing with. Coming to the [Raleigh] area, I got to meet a lot of new musicians. And all that experience kind of goes into you as a musician.”

Performing on stage is often energetic and exciting, especially if the crowd is into the performer. “To me it’s not just where you are but who you’re playing with is where the energy comes from,” he says. “For me, that can be in the audience or your own stage. It all depends on the situation you’re in. Like in different genres, you’re expected to play certain functions, integrals, and dynamics. So you try to develop as many skills as you can. Sometimes they cross over and sometimes they don’t.” When Ed Moon and the Stars perform, audiences are sure to feel as transported as the band when they play.

Ed Moon and the Stars will be performing this Saturday with Emily Scott on piano, Reginald Leatherberry on sax, Bill Hayes on drums and Ken Demery subbing on guitar.